Thursday
We had big plans this time to meet up with some friends for a New Year’s Eve braai, but Ruxi and I were to take an exceptionally long way around to get to Riebeek West. As with most plans in 2020, it seemed a fitting end to the year with another curveball resulting in us modifying plans and heading home early, but that didn’t stop us from our human nature to explore.

Leaving home at 07:30 to battle traffic up the N1, I was so engaged with the cagers that I forgot to take the R304 to Stellenbosch, and had to focus on the R44. We then took the Helshoogte route to Franschhoek and as we were winding up towards the viewpoint at the top, I saw 3 battle ready adventure bikes and so the chase was on. They didn’t put up much of a fight and upon closer inspection, they turned out to be 450cc enduros. Clearly, they were never built for tar roads and much more suited to mountain goat duty than Pumbaa, my GSA 1200.

Dirt roads took us through the country side and into Greyton, with rolling green hills of the Overberg region that make me feel part of a Windows Wallpaper. Passing Khomeesdrif Camping Site and pulling into Riversonderend at half 10, we took a mix of tar and gravel to get to McGregor an hour later for brunch at the lovely, family run café, At The Courtyard.

It was a short sprint in the oppressive heat to Robertson and then on to Montagu for some wine tasting at Mimosa Wines. We originally intended going on an evening game drive that day, and therefore had to check in mid-afternoon (I assumed it was a fair distance from the accommodation – hence the early start). After we got some groceries and fuel in town, we raced up Langkloof Pass and on to African Game Lodge.

Arriving just after 15:00, we could tell by the 38-degree temperature, that there was going to be very little game wanting to be seen by gawping humans so we hit the bar and chilled poolside while planning our further conquest of the Klein Karoo in the coming days. 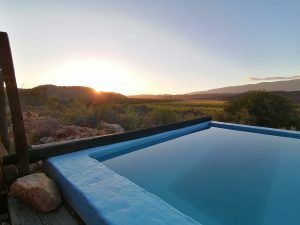 Friday
It was decided last night that we’ll get an extra early start, and do our game drive in the morning – it seemed the better alternative than the previous evening. The morning turned out to be an unexpectedly cloudy and misty morning, but visibility improved as soon as we escaped our little valley. It wasn’t a busy morning, but we did get to view Oryx, Eland, Wildebeest, and Zebra.

Once we sat down for breakfast, we got slapped with reality when we saw our phones and heard what Oom Cyril had to say – And that kids, is why you should leave your phones at home when travelling, they are a terrible leash to the very things we like to leave behind while living our dreams.

We were so fortunate to watch 4 springboks bounding just a few meters off the road as we were leaving the reserve. Ascending the Ouberg Pass, we stayed south of the Anysberg Nature Reserve and headed straight for our ol’ mate Geoff’s farm house in Buffelspoort to hopefully escape this hellish heat of the day and make sure he behaves himself. Disconnecting from the outside is a simple trick when there is no cell reception, electricity, or wifi, and the good company around you is all that is necessary when out in the countryside. In no particular order, the events for the rest of the day went something like this: Swim, eat, swim, drink, swim, braai, eat, drink, and sleep as soundly as a security guard on duty.

Saturday
In the wilderness the sun rises way earlier than in Cape Town, and so we rose as well for a coffee on the porch. While Ruxi went for a trail run in the nature reserve, Geoff showed me around some of the neighbouring farmland trails on the plastic bikes. There is plenty of history in these parts, including evidence of the flood line clearly seen from the Laingsburg flood in 1981, and now the area is affected by the current draught in the Karoo… These are harsh lands.

We were chatting about the days route, and Geoff convinced us to push on and go all the way into Die Hel instead of just going over Swartberg Pass. And how glad am I that we took his advice!
We left Buffelspoort at 08:45 towards the R62 and Huisrivier Pass, which is one of my favourite tar passes. And so we soared through the valley with much enthusiasm before arriving in Calitzdorp for breakfast and fuel.

From breakfast, we hit the dirt, finding some great viewpoints of the dam, along the Nelsrivier into the tight gorge and narrow tracked route through the Kruisrivierpoort. This proved to be a far more scenic and enjoyable alternative to the R62. We reached the start of the iconic Swartberg Pass just after 11:00, and I felt quite intimidated to be honest by the sheer scale of what we were about to climb. Thanks to the genius of Thomas Bain, the route up was far more accessible than I could imagine. The only hindrance to our progress was stopping at every viewpoint – each one more inspiring than the last. But eventually we reached the summit and cruised down to a shady tree for a snack break just a few meters past the entrance to Gamkaskloof, more popularly known as Die Hel.

Although the route was very dry, we were enthralled by the vast scale of the landscape with its harsh rocky features and pit less bottom of the dried-up gorge below. We had only a few minor puddles for water crossings within the ravines as we made our way down into Die Hel. The weather played its part beautifully that day, as the light cloud cover and cool breeze kept temperatures in check at about 22 degrees, but once we arrived at the info center just before 14:00, the mercury was touching 35 degrees! And I definitely believe it gets hotter still with a name such as this.
The way down Elands Pass was a test of one’s vertigo and the constant struggle that a rider faces of admiring the ever-changing views and looking where you want to go.

We had a lunch stop at the Fonteinplaas guest farm and although a recent fire had torn down a lot of their accommodation, they have been rebuilding and are fully open for business. Bellies filled, we made a getaway just after 15:00. I would recommend staying the night in Die Hel and enjoying the views and scenery of the area instead of rushing through, but as we already had plans in Prince Albert, we had to make tracks in order to get some chow before the recently reinstated lockdown curfew.

This was my first time in the area, and going down Swartberg Pass on the northern side is magical! It reminded me of a drier Alpine pass with all its hairpin bends and big altitude loss in order to meet up with the river at the bottom. We were just so grateful to be in such a paradise after a perfect day of riding.
Settling in at our accommodation just after 17:00 and taking a much-needed shower, we were ready for dinner and decided to take a walk to the Chef’s Café, where we had a sober, but satisfying meal to end the day.

Sun
Today was a short stretch home, and a pity it was to end such a marvelous journey so abruptly, but it was the last day of the year and we had plans to kick 2020’s ass out the door in a socially safe manner.

We stayed at the friendly and comfortably equipped Casa Milorca accommodation and I certainly was reluctant to leave. But leave we had to, and we set out for the N1 at 07:00. It was a long drag to Matjiesfontein for a breakfast of eggs benedict and a short stroll through the grounds of the Lord Milner.

That long drag to Matjiesfontein continued all the way to our next stop in Worcester for a last refuel and a snack that would last us all the way home.