Friday, 15 Jan 2021
For those staying in Cape Town, we all know about the rain on Friday morning, none more so than Ruxi as the rain and spray from traffic was dribbling into her boots as we took to the highway to find ourselves in the open spaces of the wilderness as soon as possible.
There should seriously be fines enforced to limit heavy trucks using Du Toits Kloof, especially in foul weather, as we have encountered before and as we did today. In the thick mist and rain, I had to lay down the anchors as these trucks crawl up the pass at 20 km/h in order to bypass the toll fees of the Huguenot Tunnel.

We stopped in Ceres as the skies were clearing for some fuel and coffee at Tremor before continuing. Now I carried spare fuel with me, but in hind sight, didn’t need it – better safe than sorry right?! (we could have pushed on the Op-die-Berg for fuel some 45km further on) Coming over Blinkberg Pass and passing Cederberg Oasis, I realized that it’s the first time we’ve traveled this route in the northerly direction, and it certainly changes your perspective, creating a brand-new route in the process. Maybe the coffee was messing with my nerves, but I was a bit twitchy in the loose gravel near Eselbank. We eventually arrived at the rocky wall viewpoint, sometimes known for its waterfall, but we had to make do with our imaginations instead in these dry times.

Despite that, there was an angry rain cloud threatening us from the west, and I was nervous to get going down Eselbank pass before conditions got any trickier. While still on the plateau on top, there was more beach sand than I remember and I soon forgot all about that cloud, just as well because by the time we got to Wupperthal, the day was back to having its sunny disposition.

In Wupperthal we had our lunch stop at the shop serving slap chips and glass bottle Cokes before leaving at 14:00 to take the Biedouw Valley and river pass. The river rocks have a particular blackened tinge to them and it looks like they haven’t seen water in many many months. The big “river crossing” over the Doring river warns of flooding between April to November, so best check in with locals before attempting the route. There is a bike float to ferry two-wheeled vehicles across, and thank goodness, because I would hate to attempt to ride through that sand in wet conditions.

We got to the Calvinia/Cederberg border and entered what I would describe as a bunch of nothing. There is a beauty in this vast arid landscape, but the next time I hear of someone trying to claim their right to a plot of land, I’ll take them by the scruff of the neck and show them this corner of the globe. It was a long cruise to the north, then the south, then north again up the alluring Gannaga Pass that proved to be fairly tricky after a long day in the saddle. The pass is quite rocky and has suffered from the last rains in the form of many areas of erosion where the surface of the track has been washed away.

We arrived at the lodge just before 18:00 where some rest before dinner was well needed, he he he. Saturday, 16 Jan 2021
Leaving Gannaga Lodge just after sunrise was a real treat and a reminder as to why early morning riding rewards us so much. Before reaching the pass, we already had sighted a hare and gemsbok and while going down we rode past a few klipspringers not more than 4 meters away. Once on the flat plain below, a herd of springbok crossed the road in front of us with a spring in their step.

We hooked a left towards Ouberg, and again, the road was badly damaged with patches of deep ruts that could catch a rider out fairly easily. The black gravely mounds on either side, seemingly barren, clung on to sparse shrubbery hanging on to life as if for the sole purpose of proving me wrong.

Climbing up the 820 m of altitude upon the much-revered Ouberg Pass, we took our breakfast stop at the top view point at 09:30. The pass was truly rocky and steep! Offering a rough journey for any pillion, but also a measured challenge for riders too. From the summit is a 40 km run to Sutherland, and on the way, we surprised some grey rhebok that jumped the roadside fencing to make their escape.
The Sutherland planetarium was screening a show at 12:00 and we were far too early, so I wanted to take a loop just south of the town on the Merweville road. But shortly after turning north, we had to turn around due to my first encounter of a locked gate courtesy of the Sout Drift farm. They are cruel obstacles indeed.

Back in Sutherland, we viewed the astonishing formation and life of our celestial heavens during the very informative 1 hour show at the Sutherland Planetarium in town. A short journey out on the R356 is the SALT site and visitors center, but they were not accepting visitors during the plague.

Leaving for Middelpos after lunch and fuel, we got to experience fantastic bird life in the wild, and one such sighting was that of an eagle that had just caught a field mouse and had perched itself as we came past. It must’ve wanted to get to a more peaceful place for lunch away from the road as it took off suddenly and dropped the mouse from a dizzying height.

We burbled through the outpost of Middelpos and headed south for the lodge for a relaxed early Saturday evening.

Sunday, 17 Jan 2021
The lodge was accommodating enough to send us off with a packed breakfast as they did the previous day so that we could leave at our usual early bird schedule. We went back up to Middelpos and then all the way down the R354 to Matjiesfontein. It was a strange sight we witnessed of a lone baboon, with no mountains for miles around. Sitting on his rock and chewing his fingers while watching the morning Karoo rush hour traffic, he didn’t seem too bothered about anything, and someday, I too would like to attain that level of zen. Other than seeing Rafiki, the rest of the morning went by uneventfully. But I have been making mental connections of routes that I’d like to explore in the future – so we’ll definitely be back in the neighbourhood.

Touws River came next on the N1, and we stopped for coffee and fuel before heading south along the train tracks and making a loop via our second Ouberg Pass and into Montagu for some lunch at the Kloof Padstal. 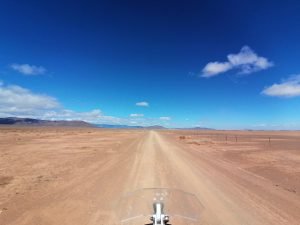